Seeing Joe Fletcher live reminds of what it was like to discover the Painted Desert for the first time. I was alone at dusk and completely unaware I would be running into something so uncontainable. It was hard to resist from constantly asking myself “Why hasn’t anyone told me about this? Is it because I’m the first person to see it? Has someone tried to tell me and I didn’t get it?” Putting into words the colors, textures and vastness was nearly impossible so I took it in and decided to keep it to myself. Any attempt to share it would fall short of what I experienced. With that said, please forgive this humble attempt to describe Joe Fletcher’s performance on Monday night.

The Mint is a small joint with an old jazz club type feel. The low stage, with its purple velvet backdrop, is surrounded by cocktail tables and high booths allowing all eyes to rest on the performer. There is little room for error. The smoky stage and funky lights suggest ‘Spoken Word Jazz’ so Fletcher stands out here. With his thin frame, messy hair and sharp features, he’s the kind of guy that makes black and white photography seem like it was invented for him. Most of the room was standing for his performance and I felt like the girl in church who was the only one sitting for the hymns. Fletcher seems as unassuming as your dad’s quiet, hardworking auto mechanic, but by the time he finishes his first song, you realize this lonely drifter is leaving with the prom queen’s heart. 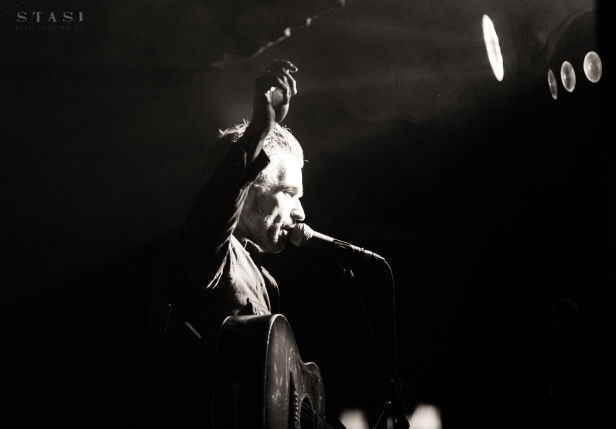 This is the third time I’ve seen Joe Fletcher live and just like the third or fourth time I saw the painted desert, I finally realized from the silence in the room, I wasn’t the only one experiencing a lack of prose. You could hear a pin drop as everyone tried to hold on to the story they just heard and still clear their mind for the next. Fletcher is a peerless songwriter and a bewitching storyteller. With a deep, haunting voice, it isn’t unusual for me to hear his sing-along, I Never, uproariously in my sleep for at least a few nights after his show. I told him this once and he seemed surprised, like he is oblivious to his affect. As I walked to my car, I couldn’t help but wonder if the Painted Desert was also designed with its creator oblivious to his effect. Then, I pulled my souvenir t-shirt out of the bag and read the bold white print. “Joe Fletcher: Alone with his guitar.” And I couldn’t help but draw the conspicuous parallel.